×
The sidebar is always accessible for you to get in touch, start a conversation or connect with us via social media or our newsletter.
Dont forget to follow us on social media too!

Fishing data shows that catches in our biosphere are sustainable.  Whilst recognising and rewarding this achievement, it’s important that we work with all concerned to keep our seas healthy with Marine Conservation Zones and a marine management plan backed up by good data.
We have been working hard with the fishermen, the conservation sector and our biosphere communities to care for them.​

The North Devon Marine Natural Capital Plan is a comprehensive framework to support delivery of the UK Government’s “A Green Future: Our 25 Year Plan to Improve the Environment” (25 YEP) across all chapters, in a place and involving local people. It will provide supplementary information for existing plans (local plans and regional marine plans) to ensure that nature’s assets and functions, that provide us with a range of benefits, are protected for us and future generations.
The consultation  is now open! Please go to our Marine Natural Capital Plan page for details

In order to establish new saltmarshes it is first necessary to select suitable land by collecting information about tidal flooding areas, urban settlement, infrastructure, gas, electricity, elevation, landownership and current flood defences.  Using ArcGIS, a geographical information system to organise and collate all the data and to select potential saltmarsh areas. The next steps are to carry out site surveys, to record the condition and type of the flood defence, outfalls, soil samples, and to look at the current vegetation. 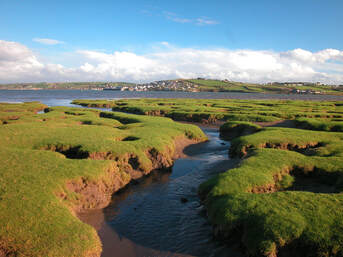 Climate change is driving sea-level rise and creating a dilemma for coastal communities all over the world.  At what point do we give up defending the coast and give way to the sea?

​How much will the sea level rise?

IPPC 5th Assessment Report on climate change - summary report
Since 1998 the Biosphere team has been involved in successive Shoreline Management Plans.  The most recent version, SMP2, was informed by a study we carried out with Professor John Pethick which models the change in the estuary over the coming 100 years.

Although not statutory, the SMP documents have undergone public consultation and provide strong policy advice and direction with a sound scientific basis.  They seek to ensure sustainable management of the coast for future generations.

Following the SMP2 a set of documents were produced to identify how some of the short term actions in the plan may be achieved. Three substantial documents; The Pebble Ridge, The Estuary, and the Landfill Erosion Study were produced.  A brochure summarises the reports.

The recent storms/change of management/condition of certain sites has created some concern with the public.  The North Devon UNESCO Biosphere Partnership has issued a statement which sets out its position and explains what our biosphere team is doing in conjunction with other agencies.
Position Statement - the Pebble Ridge at Northam Burrows, Crow Neck on Braunton Burrows and Horsey Island.

Download File
Earth Report travels to the UK and Kenya to see if special conservation areas known as biosphere reserves might help us find some answers. Andrew Bell from the North Devon UNESCO Biosphere talks about the pebble ridge at Northam. 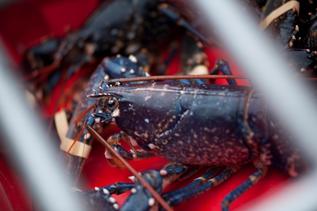 Lobster
The Biosphere Reserve Marine Working Group was set up in 2010 to bring together leisure, fishing and conservation interests to develop and propose a consensus view of Marine Conservation Zones (MCZs) within our biosphere. These zones would give legal protection to some of our most diverse, and threatened, marine habitats through careful management prescriptions.

2009 Marine Bill
The requirement for Marine Conservation Zones comes from the 2009 Marine Bill, which Parliament intended to bring to the marine environment the same degree of planning and protection as the land.

The Biosphere Reserve Marine Working Group
The Biosphere Reserve Marine Working Group was set up in 2010 to bring together leisure, fishing and conservation interests to develop and propose a consensus view of Marine Conservation Zones (MCZs) within the North Devon UNESCO Biosphere. These zones would give legal protection to some of our most diverse, and threatened, marine habitats through careful management prescriptions.

The North Devon UNESCO Biosphere’s Marine Working Group that includes fishermen, conservationists and scientists suggested a number of proposed MCZ sites to Defra in October 2010. One, ﻿Lundy, ﻿has already been designated 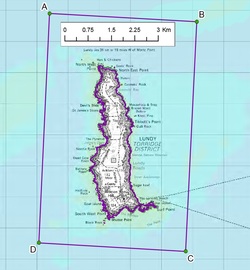 Lundy Marine Conservation Zone and MCZ designation in 2013
Since the 1990's and with the support of the North Devon Fishermen's Association the waters around Lundy have been the site of a voluntary marine nature reserve. Since 2003, a 'no take zone' for fishing was also established. This was a trail blazing initiative, led by the fishermen, that has shown how conservation and fishing can go together.

In November 2013 along with 26 others, this area was confirmed by Defra as a statutory Marine Conservation Zone. It was the only one of those proposed for the north coast of Devon that was. The Biosphere Marine Working Group continues to seek the designation of the others it proposed.